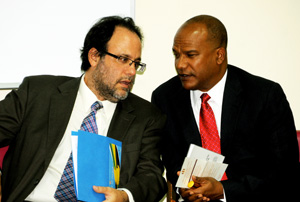 Newly-appointed Minister of National Security, Peter Bunting, and Minister of Justice Mark Golding have resigned from Proven Investments Limited, which they were instrumental in establishing two years ago.

Golding has also resigned from the board of GraceKennedy, effective January 6.

Both companies advised of the resignations in postings through the Jamaica Stock Exchange, attributing the changes to Bunting and Golding’s appointment to the Cabinet.

Bunting, who won the Central Manchester seat for the People’s National Party (PNP) in the December 29, 2011 general elections, was chairman of Proven investment management committee.

Golding shadowed commerce for the PNP, but did not contest the election.

However, he was appointed a Senator and given the ministerial position when Prime Minister Portia Simpson Miller named her Cabinet last Friday. He was a member of the investment management committee of Proven Investments.

Proven said its investment management committee would now be chaired by Christopher Bicknell and that lead principals, Garfield Sinclair and Christopher Williams would continue to provide invaluable support to the company.

Bunting and Golding have also resigned from their roles as chairman and director respectively of the board of Proven Wealth Limited, a wholly owned subsidiary of Proven Investments Limited.

The statement said Lisa Gomes would be appointed as chairman of the board of Proven Wealth and that John Bell and Chorvelle Johnson were also invited to join that board.

The new investment outfit was formed in December 2009 and officially began operating on February 1, 2010.

It was pioneered by Bunting, Golding, Sinclair and Williams who were involved at different levels in the former investment bank Dehring Bunting and Golding (DB&G).

DB&G was acquired by the Scotia Bank Group in 2008, but in April last year it dropped the abbreviation, formally referring to the company as Scotia Investments Jamaica Limited in order to align the brand with that of similar entities in the group.