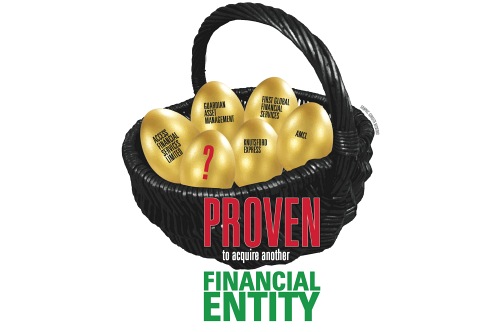 Proven to acquire another financial entity

The fast-growing financial outfit Proven Investments Ltd will seek to acquire yet another sizable financial sector entity funded from its ensuing US$20 million ($2.2 b) rights issue, the Jamaica Observer understands.

“I do not want to comment on any specific acquisition plans. But we remain humbled by the success of this five-year-old operation at Proven and we work 24/7 to seek out investment opportunities,” stated Chris Williams, chief executive officer at Proven, in a Business Observer interview. “We would like to get as much support as possible for the issue.”

However, two separate sources with whom the Observer spoke indicated that Proven aims to use the funds from its ongoing rights issue to acquire the entity.

“The Proven rights issue is geared at a specific acquisition, hence the size of the issue,” stated one source which chose to remain anonymous in order to respect protocol. “It’s in the financial services sector. But I cannot say more at this time.”

Proven aims to raise just under US$20 million in its third rights issue following two earlier issues each at US$10 million each. It also raised US$20 million some five years ago in a private placement which preceded its listing by introduction in 2011. The rights issue opened on March 24 and closes on April 2nd.

“Proven investments Limited is seeking to raise US$19.7 million by offering to its shareholders… the right to participate in a rights issue of one share for every block of three ordinary shares,” stated the Proven prospectus about the subscription which offers shares at US$0.16/J$18.50 each.

The company will issue 122.8 million shares from the offer and currently holds 368 million existing ordinary shares. The official use of the proceeds according to the prospectus includes building the company’s capital base.

“The company intends to use the capital raised to pursue expansion and acquisition opportunities,” added the prospectus.

Proven Investments capital stands at US$33 million. It made US$1.1 million net profit for its December third quarter 2014 or 62 per cent more profit year on year. The company’s return on equity stands at 10.9 per cent on an annualised basis.

Last December Proven announced that it became the largest shareholder in microlender Access Financial Services Ltd through its 49 per cent acquisition for $1.2 billion, after the shares were offloaded by Mayberry Investments and other shareholders. Last November, Proven increased its shareholding to 20 per cent in Knutsford Express which operates a cross-country bus service. In July that same year, Proven announced that it acquired First Global Financial Services for roughly $3 billion. It also acquired AMCL — a microlending firm previously owned by Scotiabank in January 2012. Proven acquired Guardian Asset Management in 2010 and renamed it Proven Wealth Ltd.